Hello Everyone,
WOW, Tuesday nite was the monthly get together for the stamping club of which I am a member, and the time flies by between meetings. Well each month we are given a challenge, We are given something to use in making a card or some other project.

We were given this: 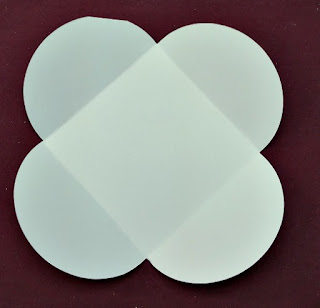 Its a card that folds into a 5X5 square with half circles on each of the edges of the square.

I decided to make this a winter wonderland themed card. 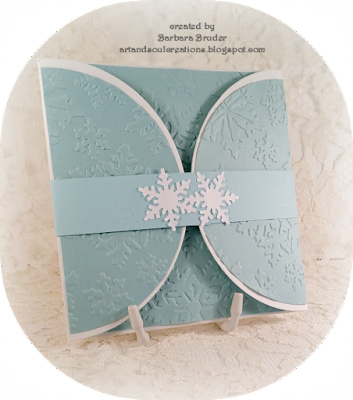 First I cut circles using blue CS, and cut those in half and ran them thru an embossing folder that has snowflakes on it. I attached the half circles on both sides of the half circle card flaps. You will notice that I made a belly band and added 2 white punched snowflakes. That belly band holds the card closed. 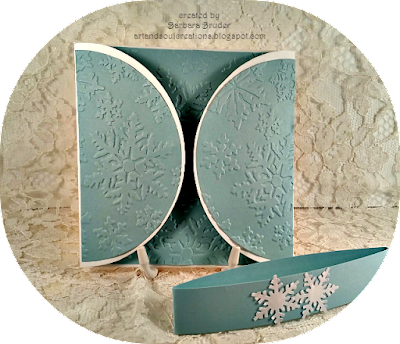 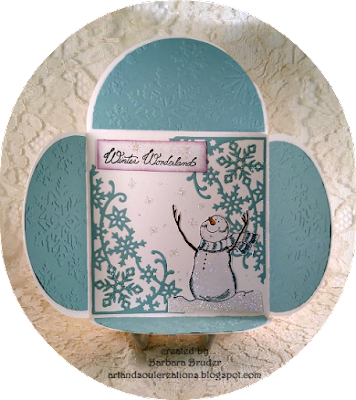 to reveal a darling snowman. I used a beautiful die - Snow Corner, placing two of them in opposite corners.

I added a snowman and just added a bit of color to his scarf. Then the sentiment gets added and lastly I used a glue pen to add glittery falling snowflakes, a snowbank and some highlights to the snowman.

Notice those embossed half circles are on the inside of the card as well as the outside.

I am submitting my card in the following challenges:


Thanks for stopping in today, I will be back soon with another project.

Too cute Barbara - what a darling little snowman image! He's such a cute surprise inside the awesome folded card. Love it!

Lovely card! The snow corners are great accents and the adorable snowman. Thank you for joining the November Challenge at Sunsational Stamps Blog.

Great layout!! Thanks for joining us at Crafting for all Seasons. Good luck.
Bye,
Groetjes van Ine (DT)
http://creaine-challenges.blogspot.nl/

Cute peek-a-b00 card. I forgot this design, and thank you for the inspirational reminder! Thanks for sharing with us at Your Scrapbook Place challenges this month.

Lovely design, beautiful palette and embossing, love the way it opens to show the cute image! Thanks for joining us at Creative Moments this week.
Chris
x

Very Cute, Gorgeous colours and image. Thanks for sharing with us this fortnight. Lisa DT Creative Craft Cottage

Fabulous work on this card. Love the image and your design. Thanks for joining the Crafty Addicts challenge.

This is wonderful! Great Job!
Thank you for joining us at Crafting for all seasons
Veronique DT
Please link up your card to the challenge not to the blog:
http://craftingforallseasons.blogspot.nl/2015/11/challenge-114.html?m=1

Your card is very beautiful !
Thank you for joining us at Creative craft cottage!
Good Luck and hope to see you again.

Beautiful card. Love the shape. Really different and a lovely insert. Thanks for sharing with us at crafting for all seasons.
Stacey, DT x

Superb work ! nice shape !
Thanks for playing with us at the Cute As A Button challenge ! xx

Firstly I love the idea of giving someone a challenge in this way. I love the embossed detail on your card. The colour is my favourite and the wrap is the perfect finishing touch. A super way to hide the lovely surprise image inside. Good to have you with us at Natalie and Amy's challenge this month. Hugs Sheryl DT member xx

I love how unique your card is! Great use of the die cuts & embossing folder - such a wintery feel... thanks for joining our November challenge at One Crazy Stamper!

This is a fabulous card, such a brilliant design.
Thank you for joining us at Crafting for all Seasons.
I have candy on my blog if you would like to take a look - http://craftingwithcotnob.blogspot.co.uk/
Pauline
x

Hi, Love the image and the lovely colouring !! All the embellishments are perfect as well. Thank you for joining us at The Crafty Addicts Good luck. Hope to see you again for our next challenge.
Abbie ( Co Owner)

Congratulation you won 2nd prize in the Sunsational Stamps November Challenge!! I have emailed you with instructions on how to collect your prize. Thanks for joining our challenge

Owner and designer for

Buddy - gone but not forgotten 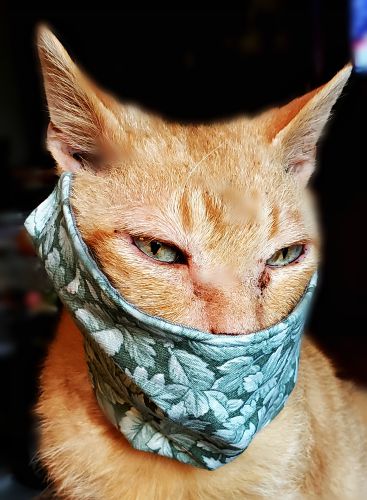